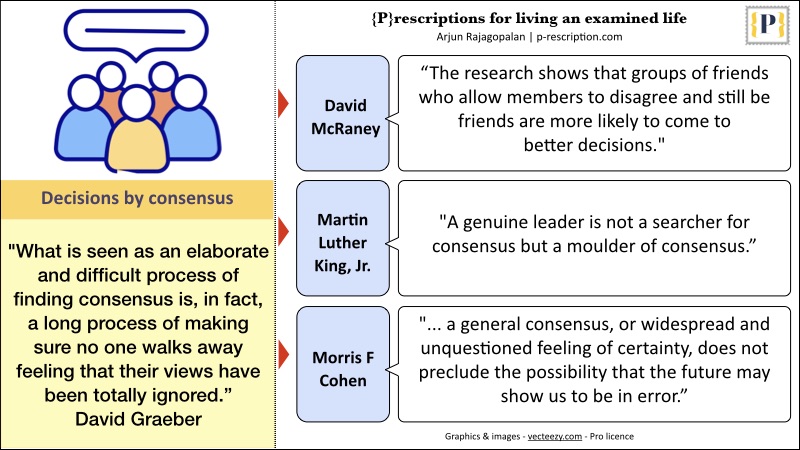 “ℂ𝕠𝕟𝕤𝕖𝕟𝕤𝕦𝕤 𝕕𝕖𝕔𝕚𝕤𝕚𝕠𝕟-𝕞𝕒𝕜𝕚𝕟𝕘 𝕚𝕤 𝕤𝕦𝕣𝕡𝕣𝕚𝕤𝕚𝕟𝕘𝕝𝕪 𝕖𝕗𝕗𝕖𝕔𝕥𝕚𝕧𝕖 𝕚𝕟 𝕓𝕠𝕥𝕙 𝕔𝕠𝕞𝕞𝕦𝕟𝕚𝕥𝕚𝕖𝕤 𝕒𝕟𝕕 𝕨𝕠𝕣𝕜𝕡𝕝𝕒𝕔𝕖𝕤” || 🆃🅸🅻 ✅ Voting may seem the quickest route to a resolution, but it isn’t the best way to enrol everyone. Voting can silence dissenting voices and thwart creativity. ✅ Consensus decision-making leads to broader engagement. No proposal is adopted until every concern is heard, understood and addressed. … increases how much you care for them and view them as people. ✅ A specific model: first, create a core values statement, and measure all practices and procedures against it. Next, develop a “This is how we do it” document. 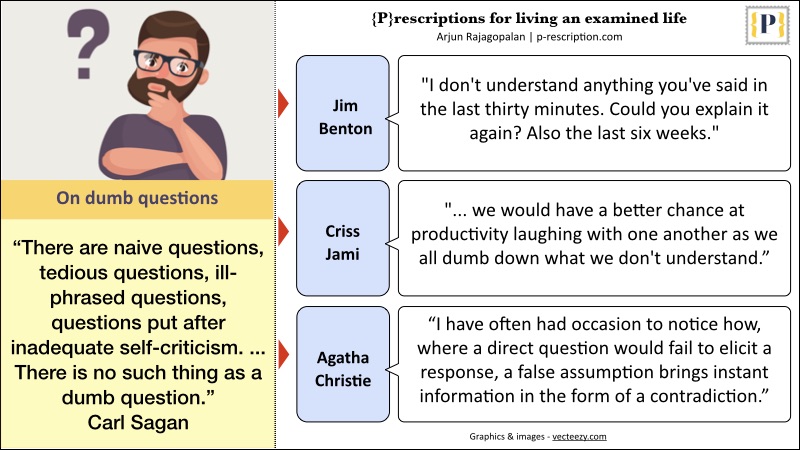 “𝕊𝕥𝕠𝕡 𝕥𝕣𝕪𝕚𝕟𝕘 𝕥𝕠 𝕒𝕤𝕜 “𝕤𝕞𝕒𝕣𝕥 𝕢𝕦𝕖𝕤𝕥𝕚𝕠𝕟𝕤” || 🆃🅸🅻 ✅ A Smart Question is a query designed to advertise the wisdom of the asker. … how counterproductive feigning intelligence [is] during the process of trying to collect [information]. ✅ Big Dumb Questions (BDQs) … Really revelatory and surprising answers can come from extremely basic questions. 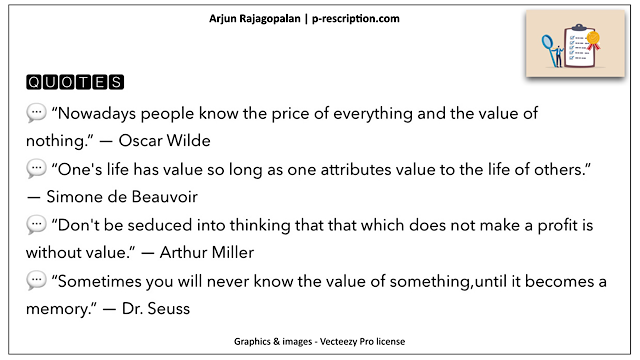 “𝕎𝕙𝕪 𝕕𝕠 𝕨𝕖 𝕝𝕚𝕜𝕖 𝕨𝕙𝕒𝕥 𝕨𝕖 𝕝𝕚𝕜𝕖?” ||🆃🅸🅻 ✅ We build our understanding of the world based on how much we enjoy certain aspects of it. The object does not have inherent hedonistic worth. ✅ Symmetry, balance, and the golden ratio, among others, have been proposed as factors in how we evaluate aesthetic quality. ✅ But, valuation systems are flexible, not dogmatic. 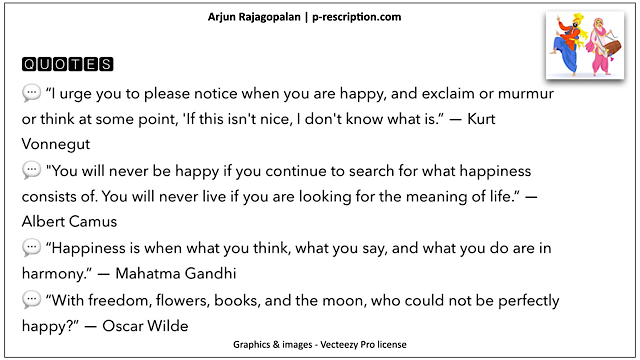 “𝔽𝕝𝕒𝕧𝕠𝕦𝕣𝕤 𝕠𝕗 𝕙𝕒𝕡𝕡𝕚𝕟𝕖𝕤𝕤” || 🆃🅸🅻 ✅ There are two types of happiness: hedonic and eudaimonic. ✅ Hedonic happiness stems from activities which give fleeting pleasure; eudaimonic happiness is joy that has meaning and purpose. ✅ Moreover, we tend to derive greater satisfaction from experiences than from material possessions. ✅ We are under no compulsion to favour one over the other. Instead, we should aim to create a life that allows us to enjoy both. 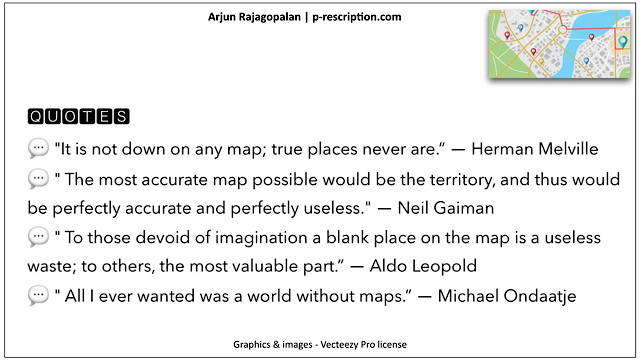 “𝕋𝕙𝕖 𝕞𝕒𝕡 𝕚𝕤 𝕟𝕠𝕥 𝕥𝕙𝕖 𝕥𝕖𝕣𝕣𝕚𝕥𝕠𝕣𝕪” || 🆃🅸🅻 ✅ Maps are convenient models that help us navigate the complexities of the real world. Information is stripped in the interest of compactness. ✅ They are poor pointers to the risks strewn across the path. People often mistake maps for true representations of the world. 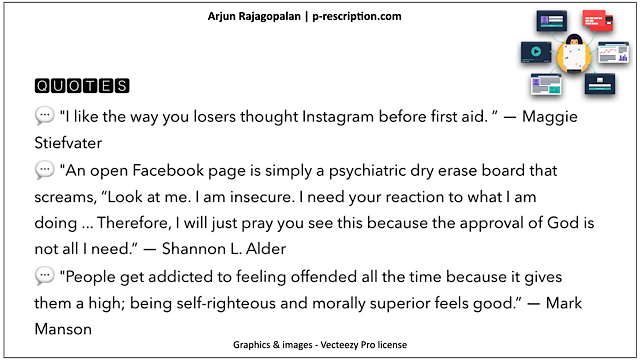 “𝕋𝕙𝕖 𝕒𝕘𝕖 𝕠𝕗 𝕤𝕠𝕔𝕚𝕒𝕝 𝕞𝕖𝕕𝕚𝕒 𝕚𝕤 𝕖𝕟𝕕𝕚𝕟𝕘” || 🆃🅸🅻 ✅ Social media offered both opportunity and calamity. ✅ Regrettably, it has resulted in a positively deranged, psychopathic portrayal of human sociality. The more emotionally charged the content, the faster it spreads via the networks. ✅ Facebook and Twitter’s potential demise presents an opportunity to accept their destruction… and allow the emergence of better alternatives. 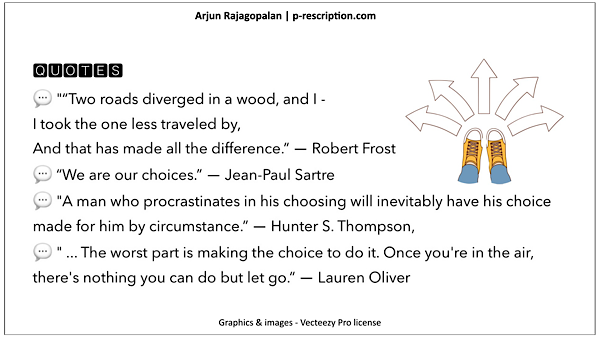 “𝕎𝕙𝕪 𝕨𝕖 𝕕𝕖𝕞𝕒𝕟𝕕 𝕔𝕙𝕠𝕚𝕔𝕖𝕤 𝕓𝕦𝕥 𝕕𝕠𝕟’𝕥 𝕝𝕚𝕜𝕖 𝕔𝕙𝕠𝕠𝕤𝕚𝕟𝕘: 𝕥𝕙𝕖 𝕕𝕖𝕗𝕒𝕦𝕝𝕥 𝕖𝕗𝕗𝕖𝕔𝕥” || 🆃🅸🅻 ✅ We enjoy having options, but dislike making decisions. Choices give us a sense of control. ✅ When given a choice, however, we tend to prefer the default option: the default effect. Our survival instinct, hardwired to prevent loss, instructs us to avoid potentially dangerous circumstances.✅ Infuse a little more effort into your decision-making. Consider following the wise counsel of Robert Frost to choose “the road less traveled.”

Doubtless, you are aware of the chaos at Twitter. Mastodon has emerged as an alternative to those giving up on Elon Musk’s vision of a Brave New World. I have created an account for myself: @arjun.@home.social. Here are my posts (“toots”) from Mastodon.

➡️ 𝕌𝕤𝕚𝕟𝕘 𝕔𝕙𝕒𝕣𝕥𝕤 𝕥𝕠 𝕞𝕚𝕤𝕝𝕖𝕒𝕕 𝕒𝕟𝕕 𝕗𝕠𝕠𝕝 𝕡𝕖𝕠𝕡𝕝𝕖 — Most of us struggle with making sense of numbers and data. Charts are the most common method of making numerical data understandable. Like all tools, they can be used for education just as well as for misinformation. Here’s a common example of how bar graphs can manipulate the viewer’s judgment.

🆀🆄🅾🆃🅴🆂
💬 “He uses statistics as a drunken man uses lamp-posts… for support rather than illumination.” — Andrew Lang
💬 “Facts are stubborn things, but statistics are pliable.” — Mark Twain, who also said, “There are three kinds of lies: lies, damn lies and statistics” — which he in turn attributed to Benjamin Disraeli, the British politician.
💬 “Sanity is not statistical.” — George Orwell (1984)
💬 “Miracles are statistical improbabilities. And fate is an illusion humanity uses to comfort itself in the dark. There are no absolutes in life, save death.” — Amie Kaufman

ABOUT THIS SERIES OF CARDS: “Men follow their sentiments and their self-interest, but it pleases them to imagine that they follow reason. And so they look for, and always find, some theory which, a posteriori, makes their actions appear to be logical.” — Vilfredo Pareto